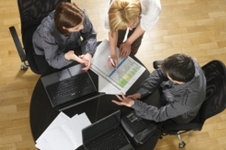 Have you ever seen a team fall apart because of bickering, infighting, or a failure of accountability? Not only is it frustrating to watch teams disintegrate, it’s also incredibly disheartening.

This is why it helps to know about “Lencioni’s Five Dysfunctions of a Team.” In this article, we’ll explore these five dysfunctions, and we’ll look at what you can do to fix them.

About the Five Dysfunctions

Patrick Lencioni, president of management consulting firm, The Table Group, wrote about the Five Dysfunctions of a Team in his 2002 book of the same name. He developed these principles after observing and coaching thousands of CEOs and Fortune 500 management teams.

The five dysfunctions are:

Let’s look at these in more detail.

Lencioni says that an absence of trust is the most severe dysfunction that a team can have. Without trust, productive work and growth are almost impossible. Team members spend time and energy protecting themselves or undermining each other, instead of focusing on the work and goals of the team.

By contrast, when team members trust one another, they’re willing to be open and “vulnerable” with the group. They trust that no one will attack them maliciously, which means that they can spend their time and energy on the work at hand.

Team members show a lack of trust when they:

Conflict can be productive when it happens with a solid sense of trust on both sides. With this type of conflict, people challenge and improve one-another’s ideas, and even better ideas result. Productive conflict avoids personal attacks, politics, and destructive fighting.

Team members who fear conflict spend time and energy being nice to everyone, and hold back their true opinions. This means that they may not share conflicting information, and the team loses the opportunity to confront awkward truths.

Signs that your team might fear conflict include the following:

Teams that lack commitment delay making important decisions and miss opportunities. People may want to gather more data to make a decision, or may prefer to wait to “back the winning side.”

Lack of commitment can also directly relate to a fear of conflict: without honest debate about a course of action, people may feel that they haven’t been heard. When this happens, they may not support a decision that isn’t theirs, no matter how feasible it is.

Your people may be suffering from a lack of commitment if they:

People who avoid team accountability don’t challenge one another about actions or mistakes that could hurt the entire group. They don’t pressure other team members to improve, they don’t question others’ ideas or actions, and they don’t hold one another to high standards.

More than this, they don’t cover for failing team members, meaning that the team can miss its goals.

Team members may be avoiding accountability if they:

This happens when people are working towards objectives that don’t actually help the team meet its overall goals.

You may have issues with this dysfunction when:

Note:Remember that these are just five factors that can affect the performance of your team, and fixing these issues won’t provide a solution to all team problems. OurTeam EffectivenessÂ section has many more resources that will help you improve team performance.

We’ll now look at how you can address each of the five dysfunctions:

It takes time to build trust in a team, and it’s important to realize that trust has to begin with you. This means keeping your word, being honest, and being a good role model. You need to show your people that you’re willing to work just as hard as they are, and that you’ll support them when they need help.
If you’re gaining the trust of a new team, then “open up” first. Tell your people your background, some stories about your achievements, and, most importantly, admit to some imperfection. If you show that you’re willing to be vulnerable, it will likely help them open up to you as well.
It might be more difficult to convince people to trust others. Your people may have broken one another’s trust in the past. Or the team might be new, with no past relationships to build on.
Make it clear that you expect people to behave in a trustworthy way. Discourage gossip, and reward good team behavior.
You can take a small step toward building trust between your people by doing a “getting to know you” or icebreaker exercise. Have everyone sit down together and, one by one, go around and answer a few personal questions. Your team members could talk about where they grew up, what their favorite hobbies are, or the challenges they went through in high school or in their first job.

If your people are avoiding conflict, then start by explaining to them that conflict can be productive when it’s not personal. Encourage them to challenge one another’s ideas when they disagree, and to engage in healthy, spirited debate.
This can be tough at first, especially for shier members of your team. Engage everyone by asking point-blank, open-ended questions during meetings. (Our article on Constructive Controversy offers further insight into getting your team involved in productive debate.)
If you suspect that team members are going through deeper, more personal conflict, Bell and Hart’s Eight Causes of Conflict can help you identify the source.
It’s also useful to train your people in conflict resolution.

If your team is going to succeed, then everyone needs to support the decisions made by the team, and be committed to achieving its objectives.
To get support for decisions, involve people in the decision-making process where appropriate. Everyone won’t always agree on the best course of action, but you can make sure that people have a say in decisions by organizing team decision-making effectively. Make sure that everyone has had a chance to voice their opinion, including the less vocal members of your team.
When a decision leads to change, work on building support, and be open about how decisions were made.
To encourage commitment, you also need your people to make their own decisions in good time, even when facts are uncertain. Highlight the consequences of not making timely decisions, and encourage people to use their initiative to take things forward.
Also, set clear deadlines for team members, so they’re forced to commit to a course of action, and avoid micromanagement â€“ this can lead to people referring every decision to you, rather than dealing with issues themselves.

Your people need to be accountable to themselves and, importantly, to other members of the team.
Start by making sure that everyone is taking responsibility for their own work and actions.
Then use a team charter to highlight people’s roles and responsibilities within the team, as well as team objectives. This makes it clear who is responsible for what, so that people are less likely to shy away from what they’re accountable for.
Also, encourage team members to give one another regular mutual feedback on their work, behavior, and achievements. This is especially important when people are performing badly, or not taking responsibility for their work.
Lastly, try setting up a system of team rewards. This promotes team accountability because people are unlikely to want to “let down” their colleagues with their own poor performance. It also encourages team members to support and provide feedback to poorly performing colleagues, and motivates them to use their initiative and put in extra work when this is needed to achieve the team’s objectives.

Tip:
Although your aim is to promote team accountability, you also need to step in and deal with poor performance. Use your best judgment here â€“ take action as soon as possible if people are performing badly.

To overcome this dysfunction, make sure that your team members are focusing on the real goals of the team and organization.
Mission statements and (again) team charters are helpful for highlighting your team’s goals in a clear and obvious way. Once everyone knows what the team is working towards, it’s harder for people to misunderstand or ignore those goals in a self-interested way.
Also, use tools like Management by Objectives and KPIs to align people’s own objectives with the objectives of the team and organization.
You also need to set an example yourself. Make sure that you’re staying as focused as possible on the team’s goals, and that you are working tirelessly to accomplish them.

Inattention to team objectives.Use your awareness of the five dysfunctions to recognize issues as they happen, so that you can help your team to be more effective. And remember that these are just five of the factors that can affect the performance of your team, so use these alongside other team effectiveness tools.

4 comments on “Lencioni’s Five Dysfunctions of a Team”

This site uses Akismet to reduce spam. Learn how your comment data is processed.